I love fun topcoats. Holographic, shimmer, glitter - they just make a plain old creme polish fun. Now I can add flakey polishes to that list. I bought Barielle Elle's Spell recently, and didn't even realize it was flakey polish until I layered it over black. That's all it took. It took me all of three minutes to hop onto fabuloustreet.com (US distributor for Nfu-Oh polishes) and order a pair of them. I ordered Nfu-Oh 38 - red flakies suspended in a clear polish, and Nfu-Oh 39, blue-green flakies suspended in a clear polish. The second they came in I pulled out a blank color wheel and pulled out an assortment of creme colors, and painted two nails in each color. Then, for each creme I added a top coat of Nfu-Oh 38 on one and Nfu-Oh 39 on the other. At that point, just for the heck of it, I painted half of each nail with a matte topcoat. 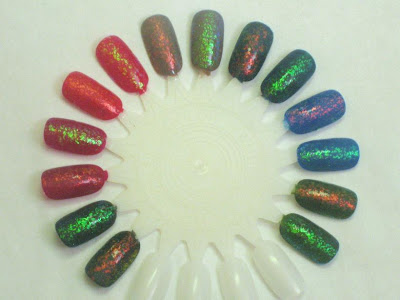 It was very interesting to see each color change with the different flakey topcoat. Unfortunately, I don't remember the cremes I used. Bad blogger. I do remember the ones in the 7-8 o'clock position are black, and then it's just downhill from there. The matte topcoat is on the outer half of the nail. In general, bluish and greenish colors looked good with the blue-green flakies and reddish colors looked good with the red flakies. Colors like black or purple looked equally good in both the red or blue-green flakies.

While in Target recently, I grabbed the Revlon Top Speed polish in Royal. I've seen the color raved about around the blogs, and I have to agree. It's a bright, shiny jelly royal blue. It's actually a very flattering color. No problems with application, and the dry time was pretty quick. I took my picture not 5 minutes after doing the last nail and had no problems.

I knew I wanted to put a flakey topcoat on this. The color just screams for it. And Nfu-Oh 39 is just the right topcoat for the job. I put one layer of Nfu-Oh 39 on top of two coats of Royal.

I loved this combo. It was so shiny, that I could barely get a picture without seeing my own reflection in my nail: 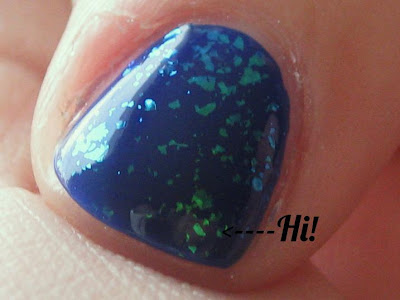 .
There I am - in the lower right hand corner of my nail! This was a great and flashy manicure. I would just stare at my nails randomly during the day. It was so flashy that the MAC sales associates ooohed and aaaahed over my nails when I went into the store later that night. In fact, she called the other SAs over to see. (I've said it before, many people have written how they don't care for the MAC associates in the stand-alone stores, but I LOVE the ones at my local suburban Philadelphia store).

I usually gravitate to shimmery, glittery nail polishes while passing over the cremes, these topcoats have now opened a whole new type of nail polishes that make me take a second look.

Jeannine
Philadelphia, PA
I'm a 30-something beauty junkie. I've decided to share with the world, or at least anyone who wants to listen, the extent of my addiction. I'd like to have my nails polished more often, however a certain little boy seems to prevent that.